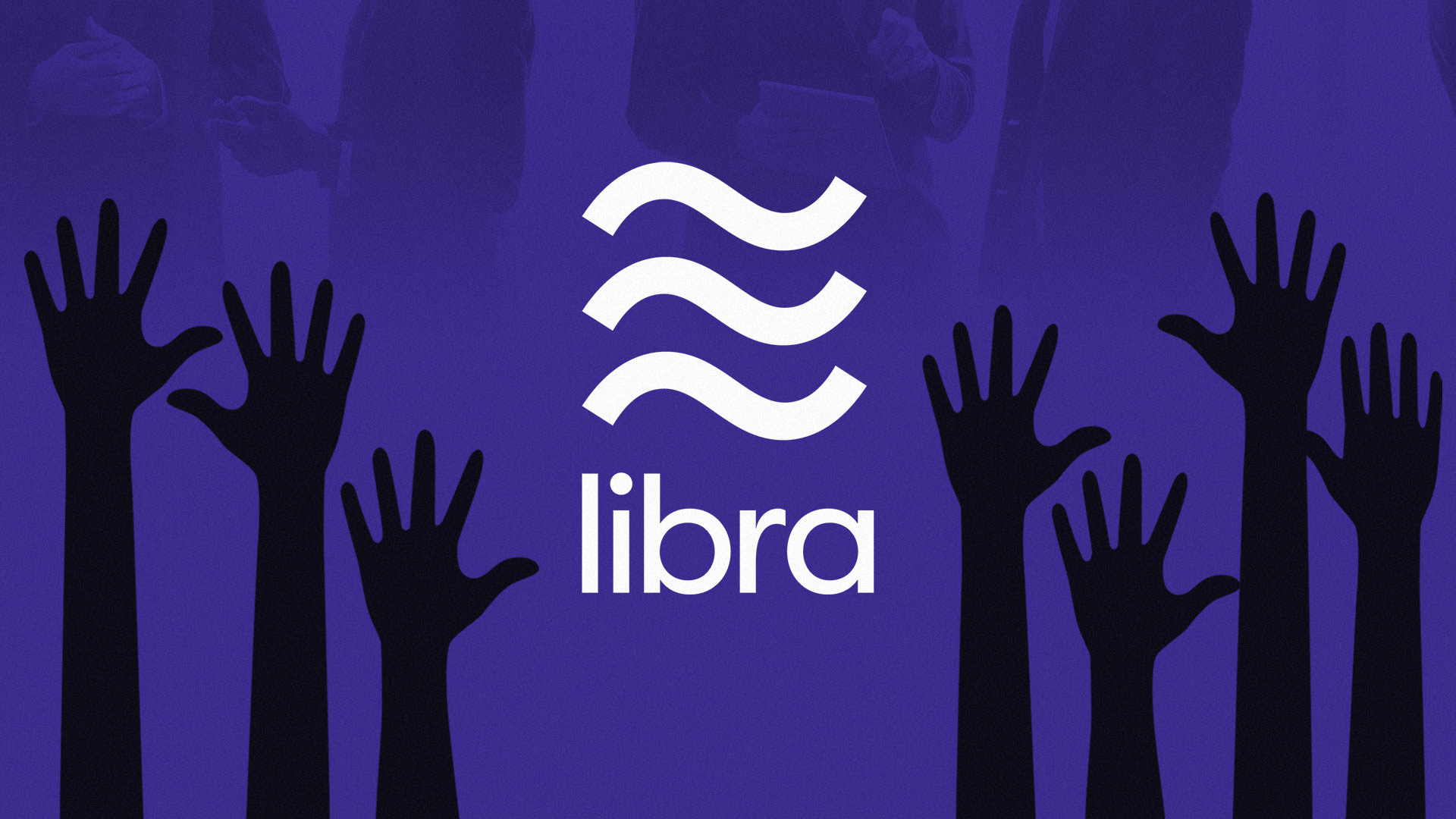 First and foremost, Libra  (Libra.org) aims to be a global currency. You know all the hopes, dreams, and desires of us Bitcoin cheerleaders trying to usher in an age where BTC is the internet’s money? Well, Libra wants to be the same thing, except it has a 2.38 billion monthly active user head start. Having had time to watch decentralized cryptocurrencies appear,
disappear, and develop, Libra has notably taken some of crypto’s best ideas and rolled them
into its platform. FB Libra Coin – Infographic

1. Libra is a stablecoin.

With several currencies and securities backing its value, Libra will be far less
volatile than BTC and other cryptocurrencies which often see valuative shifts in a day that would make or break a retail user’s account. That makes it primed for use as a day to day currency which can be sent globally between friends, families, and for retail purposes. Freelancers, the fastest growing segment of the global labor force, will certainly enjoy being paid in a currency that can be used as a global standard and cashed out to one’s local currency of choice.

3. Libra has a mammoth built-in userbase.

With a userbase that easily exceeds the populations of both China and India (individually, but almost when combined as well), Facebook’s goal of taking Libra
global is already as good as done. Libra can be accessed via Facebook Messenger, Whatsapp, and its own app which won’t require a Facebook or Whatsapp account to use at all.

4. Libra has next to zero fees.

Above and beyond all else, sending, receiving, and payment processing
with Libra will make for significant and noticeable savings to those used to incumbent payment processors, PayPal, Western Union, and banks in general.

Libra has ticked off the necessary boxes for creating a new currency that actually represents a functional step up from the fiat currencies we use but love to hate. Nearly free to use, built into apps everyone already has, and stable value — what’s not to like?

If you’re a regulator, nation-state, privacy advocate, or anti-monopolist, then the answer to
the previous question is, well, everything. Before diving into the issues with Libra, however,
let’s finish tackling the technical merits of the project.

Crypto is volatile — everyone knows that. No need trying to sugarcoat it with a happy-go-lucky store of wealth talk. Imagine being a freelance software dev who has just finished a project for a client when, all of a sudden, the client asks if you accept BTC. Eager to please, you say yes and send along your address. Unfortunately, your landlord doesn’t accept crypto, so you’ll need to cashout to fiat ASAP to make the payment.

Your client takes her time in sending the payment until voila — it arrives in your wallet at 7 PM, well after your working hours and on a night when you were with friends before knocking out.

Ten hours later, you wake up to see the payment has arrived but to your dismay, BTC took a
steep drop overnight. Ever convinced that the price will recover and you’ll make your full
payment back, you keep HODLing. Unbeknownst to you, a several-week-long downturn is
forming and, unable to hold off paying your rent any longer, you take a big hit on your payment and cash out.

Instead, Libra is backing its cryptocurrency with the aforementioned reserve of central
bank-issued fiat. The simplicity of Libra’s design in this regard is noteworthy. Basically, the
reserve works like this:

1. Investors buy Libra Investment Token. Their money goes into the reserve, thus creating and circulating
Libra coins. The funds in the reserve are invested into low-risk assets — over time, the interest yielded
from those investments will be paid as a return to LIT investors.
2. Users who buy Libra coin with fiat simultaneously create Libra while their fiat goes into the reserve.
In effect, the Libra network reserve only grows with actual usage. Libra coin is, therefore,
non-inflationary and can only be grown supply-wise with increased adoption and real money
backing it in the reserve.
Also worth mentioning is Libra’s method for keeping the reserve. Rather than keep it in one
place, the Libra reserve is geographically distributed amongst high-end accredited custodians

The Libra Blockchain is a decentralized, programmable database designed
to support a low-volatility cryptocurrency that will have the ability to serve as
an efficient medium of exchange for billions of people around the world.4
How we wish the first part of that description would be true. Instead, Libra is a
permissioned blockchain which only allows a select group of validators to process
transactions. Each of those validators has paid $10 million for the privilege to be a part of
the consortium with one exception. Non-profits like Kiva and Women’s World Banking are
absolved of paying the $10 million entry fee — but, they will have to cover the costs of
operating a node, estimated to be about $280K/year. 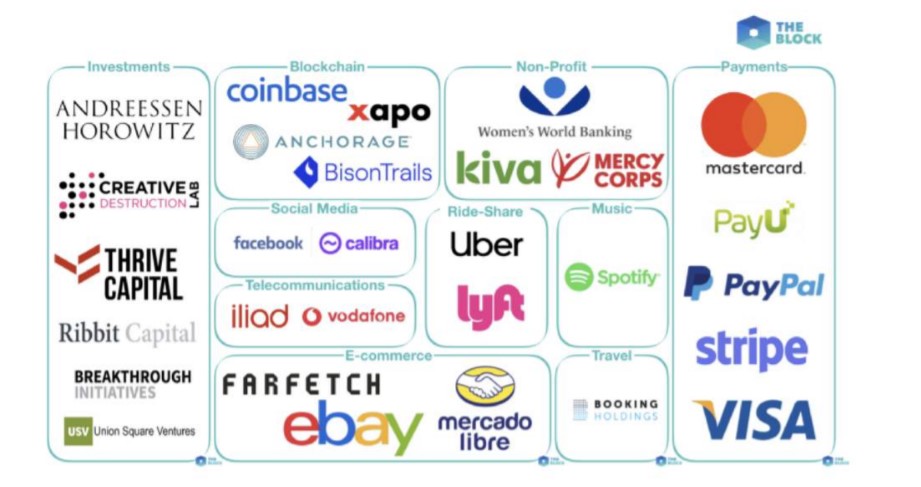 It’s easy to be impressed by the list of validators that Facebook has managed to cobble
together. However, one must ask — should we really be celebrating a network backed by
some of the biggest monopolies and data miners in the world?

In their effort to build the blockchain, Libra has created Move, a new programming language, upon which transactions will be based. While a permissioned (centralized) blockchain is far from ideal but wholly expected from a company like Facebook, Libra does go to great lengths to spell out its vague hopes of becoming permissionless in the next five years. To give the semblance of decentralization now, Facebook created the Libra Association which is made up of the members in the above graphic.

The Libra vision is that, after five years, its blockchain will be opened up to anyone and
everyone in a proof of stake consensus design. …our ambition is for the Libra network to become permissionless. The challenge is that as of today we do not believe that there is a proven solution that can deliver the scale, stability, and security needed to support billions of
people and transactions across the globe through a permissionless network.
Initially, Libra hopes to run 1,000 transactions per second across 100 nodes.

Moving to a permissionless blockchain with a vast increase in nodes will mean a drop in performance with the current scaling paradigm, but within the five-year time frame, it is highly likely that scaling improvements will be made which can handle the transition without a loss of performance.
Libra isn’t sweating the million TPS arms race like other projects (looking at you Harmony,
QuarkChain, and Elrond). With advice from the masters of global payment scaling (Visa and
Mastercard), they surely understand that 1,000 to 10,000 TPS is all that’s needed to get the
job done for billions of people on a payment network.

Libra is light on details, big on promises

Without offering much in the way of an explanation, Libra promises to roll the billions of
unbanked adults into the global economy, create a highly secure network for those billions
that is based on a mere 100 validator nodes , and assures users that it will maintain your private pseudonymity while simultaneously cooperating with law enforcement and governments.
The above is best exemplified by statements like the following, taken from Libra’s whitepaper:
Unlike previous blockchains, which view the blockchain as a collection of
blocks of transactions, the Libra Blockchain is a single data structure that
records the history of transactions and states over time. This implementation
simplifies the work of applications accessing the blockchain, allowing them to
read any data from any point in time and verify the integrity of that data using
a unified framework.
What does it mean? It seems as though Libra just repeated the very definition of blockchain they disputed in the opener, then claimed that quality as specific to their project. Moreover, according to this definition, Libra isn’t, by its own admission a blockchain, since a blockchain is a collection of blocks, which Libra most certainly is not.

Confusing? Yeah. Additionally, there isn’t any clear reason that this permissioned system needs to be built on blockchain or as a cryptocurrency at all. The assets it will use as a peg are highly correlated and if one goes down, then the rest probably will too. It requires fiat to operate yet doesn’t pose much in the way of advantages over the use of digital cash via apps like WeChat, Alipay, Paypal, and Venmo, and is only slightly less centralized than those apps. It’s also, in terms of TPS performance, much slower than competitors.

Finally, since Libra’s big caveat is that it will one day become permissionless, we’ll have to appeal to Facebook’s track record for honesty to determine whether or not that’s a promise worth believing in. But, last time we checked, ol’ Mark Zuckerberg thought people who trusted him were dumb fucks.
In truth, there simply isn’t enough information out on Libra yet to properly dissect what it is
from what it isn’t. Everything at this point is made of grandiose statements splashed across a
nice website and punctuated with a cartel-like association of the world’s rich and powerful.

Libra’s lack of details notwithstanding, it will undoubtedly be a force to be reckoned with.
Already, and with little more than a whitepaper, Libra has created more discussion and
headlines than Bitcoin has in all its years of operation, growth, and advancement. And,
despite it being questionable whether Libra is even a blockchain in the first place, it’s already
spurring significant growth and interest in the sector as a veritable arms race gets underway
amongst the world’s corporate superpowers.
We know this probably gets tiring to hear, but Libra is also good for Bitcoin — Ethereum, and crypto in general, for that matter.

With Facebook’s entry into the industry now a fact, the heat  is on for developers to step up and deliver or be crushed by the Zuck.