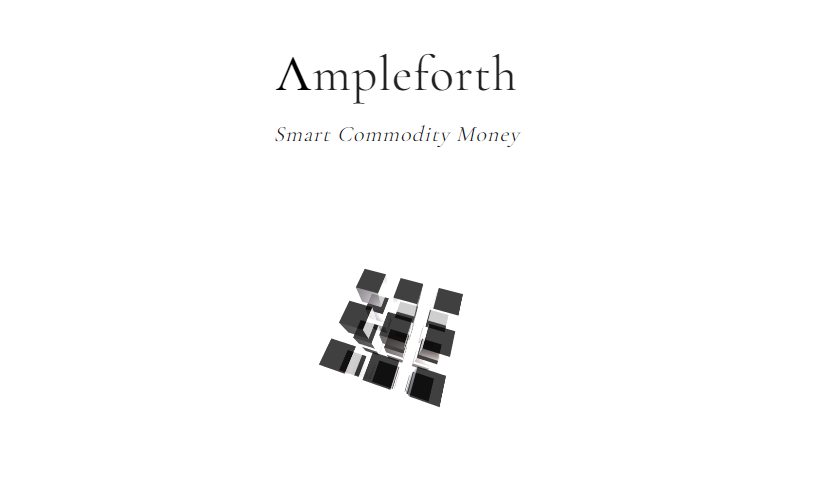 Ampleforth is a protocol for the new type of money, which the team calls ‘smart commodity money’. From the technical standpoint, the project looks like a stablecoin, but the team doesn’t position it as such. Formerly, the project was developed under the name ‘Fragments’.

10% of the total supply of tokens is offered during the IEO round. Hence, the total market cap for 100% of the tokens will be roughly $49 million USD.

The domain lifetime is 16 years. Most likely, it was purchased in the latter part of 2018, when the currently available version of the website was built. The team claimed that the project aims to create money that counteracts inflation and build “The Elastic Supply Protocol”. We assume that the official website’s lifetime is around 6 months, but according to the project’s GitHub, the development started in Spring-Summer 2018.

There are 200 unique daily visitors.

The official Twitter page was registered more than a year ago and currently has 888 followers. The activity is rather high, there are several updates weekly about the project’s progress and news on the crypto market.

The official Telegram group had 700 users on April 27, 2019, and 2050 users on May 31, 2019. The communication is in English and Chinese languages, admins are actively answering questions.

The official Medium blog page contains seven articles, two about the project and the rest about general topics.

– Got Bachelor degree in Mechatronics, Robotics and Automation engineering (2002-2006).

– Worked as a product manager at Yahoo for a year.

– Worked as a Director of Product at Sharethrough for two years. Sharethrough is a startup for marketers and publishers for modernization of marketing strategies.

– Founded Crowdrally that focused on Facebook commercials and worked there for four years. The company is not functioning anymore.

– Was founder and СЕО of Pythagoras Pizza, where he spent 4,5 years. He performed database and system engineering, thermodynamics research, and design.

Personal profile: Evan is an art and math lover. He was previously the CEO of Pythagoras Pizza and has extensive experience developing predictive auction products and working with venture capital. Evan holds a BS from UC Berkeley, where he studied a mix of ME & CS with research focused in Robotics.

Brandon Iles is a co-founder. 339 contacts in LinkedIn.

– Got Bachelor and Masters degree in Computer Science from Rice University.

– Spent roughly 6 years at Google as a Senior Software Engineer of Search Ranking.

Personal profile: Brandon spent over 5 years in Google’s Search Ranking and Machine Intelligence groups and later worked in Uber’s Ranking and Relevance team. He loves the intersection of Systems, Data, and Intelligence. He holds a BS and MS in Computer Science from Rice University.

Brandon has several publications and patents.

– Graduated from Arab Academy for Science. Bachelor of Science in Computer Engineering.

– Underwent 3-months internships at Google & Facebook as a Software Engineer.

Personal profile: Previously at Google, Ahmed spent over five years as a Software Engineer in the Search Indexing and Search Ranking groups. His passion for coding and algorithms began with competitive programming in high school and holds a Bronze Medal in the International Olympiad in Informatics. Ahmed has a BS in Computer Engineering from AAST in Alexandria, Egypt.

Aditya Sarawgi is a Software Engineer / Backend. 500+ contacts in LinkedIn.

– Graduated from the University of Mumbai and Stony Brook University.

– Spent 3 months at Yelp as an Infrastructure Intern.

– Acted as Software Engineer at Uber for 5 years.

Personal profile: Previously at Uber, Aditya began developing the end-to-end surge pricing system and later started the places search project with autocomplete, destination prediction, and current location prediction. Eventually, he moved into advanced technology research to generalize Uber’s multi-modal robotic perception networks. Aditya has an MS in CS from Stony Brook and a BE in Electronics and Telecom from the University of Mumbai.

– Got a Master’s in Data Science from the University of Southern California.

– Started as a Software Engineer at Codebrahma in Bangalore, India.

– Worked as Engineer and Data Scientist in various companies.

Personal Profile: Previously at USC, Nithin was a research engineer at the IRDS/IMSC labs where he worked on applying machine learning to big data problems like traffic prediction, recommender systems, content analysis, and text mining. His Master’s thesis was focused on developing novel algorithms to protect user friendships from location data. Nithin holds an MS Research degree in Computer Science, from USC.

Jessica formerly co-founded Pythagoras Pizza and loves working at the intersection of technology and the humanities. She holds an MFA in creative writing and a BA from UCLA.

Richy spent 4 years in NYC as a consultant, leading over a dozen projects across clients such as Morgan Stanley, DTCC and Visa. In 2017, he packed his bags and began his full-time crypto journey in Beijing at IDG Capital. Richy is currently a Venture Partner at FBG Capital and enjoys skiing, the Buffalo Bills, music and poetry. He holds a BA in Economics from Yale.

Simon Manka is responsible for Growth.

Previously at IOSToken, Simon led growth initiatives and helped IOST enter the Top 50 cryptocurrencies as rated by market cap. Simon has a passion for cryptocurrency and helping it achieve mainstream adoption. He holds a BA in history from the University of Virginia, where he played football and lacrosse.

Joey is Director of Investments in cryptocurrency hedge funds.

Sam is a co-founder of Fin, GP Slow Ventures, Inter at The Information, acted as VP of Product Management at Facebook for 4 years.

Niall is a professor at Harvard University.

Noah is a tech entrepreneur from Silicon Valley.

Currently, he acts as Head of Data at a marketing company Clearing House.

Previously, he co-founded a game and tech development company based in Boston. Studied Mathematics, Computer Science, and Finance at MIT, where he also was a Student Body President.

Paul is in charge of new deals and operations, including portfolios.

The full list of the cryptocurrency funds that invested in Ampleforth includes top-tier (Pantera, FBG, DHVC, Huobi) funds and less well-known (Spartan, Nima, Skunk – all have websites featuring their portfolios) ones.

We should highlight Slow Ventures & Founder Collective as traditional VCs and Braian Armstrong, who is a co-founder & CEO at Coinbase.

The Whitepaper was published on May 20, 2019. It mainly describes the mechanism for price regulation and emission of tokens that are called Amples.

– The aim of the project is to create an asset class, which correlates neither with the price of bitcoin nor with prices of any other assets. In simple terms, the team wants to create something like a stablecoin with dynamic emission that keeps the price for 1 Ample stable.

– The main feature is that the protocol adjusts not only current & future supply of tokens based on the price, but also holder balances, while there is no simultaneous programming influence on the price.

– Adjustments to the total supply happen the price deviates in the ranges of “Pt − δ” or “Pt + δ” and the goal is to bring the price back to “Pt”.

– The exchange rates for Amples will be aggregated from trusted providers (oracles) into a uniform weighed rate held within an Aggregator. To put it simply, oracles will communicate to the Aggregator the current price of Ample on trusted exchanges and a decision for adjustment of the emission and quantity of tokens on user wallets will be made based on that data.

– The total supply is adjusted every 24 hours in a transparent manner. The dashboard will reflect the time and summary of planned adjustments.

– The price equilibrium is also reached by market participants, who buy or sell tokens faster than others during periods of supply adjustments. It means that because they know about the upcoming changes, they can earn profits by arbitraging and define an algorithm to push the price in the right direction.

– The Ampleforth protocol will be initially launched on Ethereum but there is a possibility to later deploy it on other networks.

The IEO will offer AMPL token. The potential profit for investors is possible if the price of the token will grow as the smart-contract will create new tokens to be added to the existing supply because of the price stability mechanism. It means that if you buy tokens on the public sale, they can potentially create more tokens because of the increased total supply.

The major purpose that the team sees for creating such an asset class is in the fact that the world requires a class of stable assets, which is independent of the financial, stock and cryptocurrency markets.

There are two main open repositories on Github: oracle smart-contracts and protocol smart-contracts. As the latest commits were made more than 2 months ago, we can assume that the protocol is ready.

The Ampleforth protocol is a set of smart-contracts.

The development started in Spring-Summer 2018.

The protocol was built by three engineers: Nithin Krishna (registered on GitHub from 2014, started working on blockchain projects from 2017), Ahmed Naguib Aly (developed Chainlink), Brandon Iles (according to his GitHub profile, he worked only on Ampleforth), commentary to the commits look adequate.

The major concerns about the project are related to its practical purpose and potential user base. It’s not a tradition stablecoin and there will be volatility, albeit it will be reflected in an unusual manner. The main value proposition that the team proposed is fighting inflation and unbinding from other assets, allowing a sort of hedging instrument. We consider such a hedge instrument as very experimental and unpredictable. How convenient will it be for a user to keep track of the number of tokens in their wallet instead of the price of the token? How is it fundamentally different from simple price appreciation? Does such an approach has any practical value? These are the questions raised in our minds.

However, we are certainly interested to see how the team will make the project work.

— Very experimental project even for cryptocurrency space. There are many concerns related to the concept.

– A relatively high capitalization. Raising $5 million USD on the current market is not easy because the IEO hype declined.  (see here IEO calendar)

+ IEO is conducted via a child-company of Bitfinex, which officially managed to raise $1 billion USD.

+ The public sale will be conducted solely in BTC. There will be no exchange tokens, which are often dumped after unsuccessful IEOs.

+ It seems that the project is in its final stage. The GitHub and the developers are adequate.

+ The team and the investors are well-known and experienced.